After nearly 25 years working inside the FranklinCovey Company, and nearly 15 of them spent tutoring under both of the co-founders, you can imagine I learned some remarkable insights and skills from both Hyrum Smith (inventor of the Franklin Planner and time management process) and Dr. Stephen R. Covey, author of the iconic book, The 7 Habits of Highly Effective People.

Both men have now passed, Stephen about eight years ago and Hyrum just in the last eight months. But as a tribute to them both on the 30thanniversary of Dr. Covey’s seminal book—which Hyrum would often tease him about only having 7 Habits when Hyrum wrote a book that had 10 (The 10 Natural Laws of Successful Time and Life Management)—I’d like to share some of the key learnings I took from them both.

Stephen R. Covey taught me the difference between being efficient and being effective. There are absolutely times in life when being efficient is a skill; some calls and meetings, mowing the lawn, exercising and tasks that increase your productivity and don’t necessarily involve other people. And then there are times when we must learn to be effective, typically when it involves working or communicating with others. It requires us to slow down, take our time, listen with the intent to understand, not just to respond, which is often what happens when we’re slipping into an efficiency mindset. Stephen famously said, “with people, fast is slow and slow is fast.”

Hyrum Smith taught me the power of defining our values and living our lives in alignment with them. For years I’d heard Dr. Covey talk about personal mission statements, but as a single guy in his thirties, it simply didn’t resonate with me. Then I saw Hyrum give a speech to our company, and the next day I spent some time reflecting on what my values were and not only memorized them, but consciously began to live my life aligned to them. I identified (ironically) seven values, Purpose, Health, Integrity, Loyalty, Positivity, Abundance and Learning (PHILPAL) and have done my best to live aligned to them, (sometimes it’s a triumph and sometimes it’s a flat-out failure) but at least I know them and earnestly try to think and behave accordingly.

Stephen R. Covey taught me that you can’t talk yourself out of a problem you behaved yourself into. WOW. Now he tells me this…. you know how many years of being grounded as teenager I could have eliminated if I’d better understood this concept. OK, I understood it, but as a teen and twenty something (OK forty something) I sure didn’t live it. I’d spend much of my early life (40+ years) deploying my charm, intellect (many would debate that) and my vocabulary, smooth talking myself out of situations that I’d absolutely caused from my own irresponsible or reckless behavior. I own it all, just wish my parents had access to the 7 Habits book (it wasn’t written yet). Yes, I know the principles and concepts existed long before Stephen organized them – but that’s the power of his book – he gave us all a language, framework, and relatable concepts that allows us to transform our effectiveness.

Hyrum Smith taught me the value of commitment. In one of his most impactful quotes he defined character as “the ability to carry out a worthy decision after the emotion of making that decision has passed.” Inevitably when I’m faced with times in my own life when I want to spike the ball on the five yard line or I want to bail on a project (or relationship), because it’s just too tough, fatiguing or diminishing, I always think of Hyrum. I bet more marriages and careers would last longer (or endure naturally occurring hard times) if this concept were taken a bit more seriously by all of us.

Stephen R. Covey taught me the crucial balance of courage and consideration in relationships, especially when as a leader I am offering someone feedback on their blind spots or performance. Most of us likely fall to one end of the continuum stylistically, too much courage (we confront everything with ease and often verbally eviscerate people in the process damaging their self-esteem or even their self-worth) or the opposite where we’re so loathe to offend anyone, we error on the side of consideration and through shyness or even obfuscation we never truly deliver the message and hope that somehow telepathically the other person picks up on our intention (newsflash: they don’t).

A key to building highly trusted, mutually respectful relationships comes from the balance of both. To quote FranklinCovey’s Chairman and CEO Bob Whitman, “great leaders learn to deliver hard news in soft ways.”

Hyrum Smith taught me the power of stepping back from the trials of life, our obligations and even seemingly the weight of our commitments and seeing life through the lens of: I Have To. I Need To.
I Get To. Apply it however you want—or need—to in your life. I draw on it most evenings after dinner when I’m exhausted from twelve hours of intense work, having just listened to three young boys fight and complain through the nice dinner my wife just prepared and my job is to help clean up the kitchen and take the garbage outside to the trash cans.
I Get To walk down the stairs, outside during 5-degree winters in Utah and dump the garbage and recycling into the bins 50 feet away because my legs, arms, eyes, and heart all work.
I Get To because I own (with the bank) a home and it actually came with trash cans. I Get To afford someone on Mondays to drive up in a huge truck and take my trash away. I get to place two new plastic garbage bags back in the kitchen bins where more garbage will fill up and then Get To do it all over tomorrow night. And to my sheer delights – twice on most Saturdays and Sundays. I Don’t Have To. I Don’t Need To. I Get To!

About the Author
Scott Miller is a 23-year associate of FranklinCovey and serves as the executive vice president of thought leadership. Scott hosts multiple podcasts including FranklinCovey’s On Leadership and Great Life, Great Career. Additionally, Scott is the author of the multi-week Amazon #1 New Release: Management Mess to Leadership Success: 30 Challenges to Become the Leader You Would Follow. Scott authors a weekly leadership column for Inc.com and is a frequent contributor for Thrive Global. Previously Scott worked for the Disney Development Company, having grown up in Central Florida, and currently lives in Salt Lake City, Utah, with his wife and three sons. 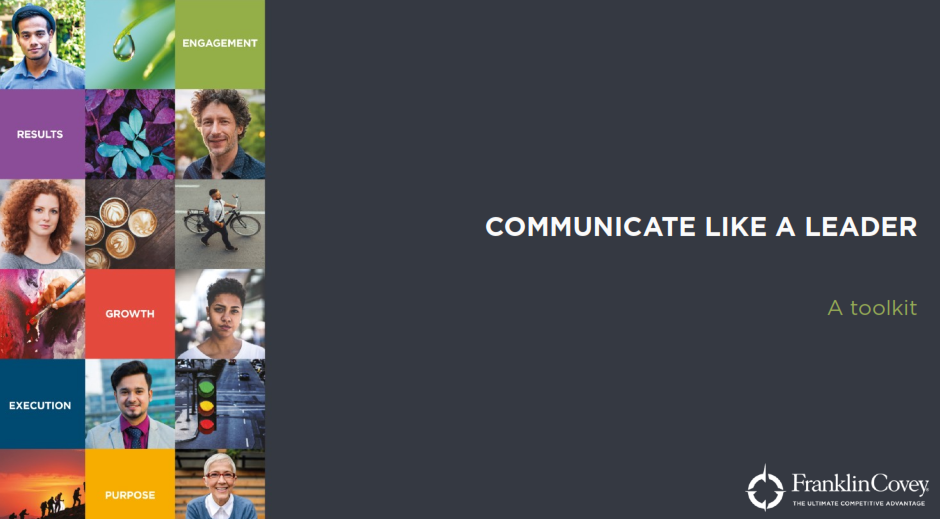 This toolkit has been designed to help you consider how you can communicate more effectively as a leader – whether you are in a leadership role or not.

If we’ve learned anything during this pandemic, it’s that some stuff doesn’t matter anymore.